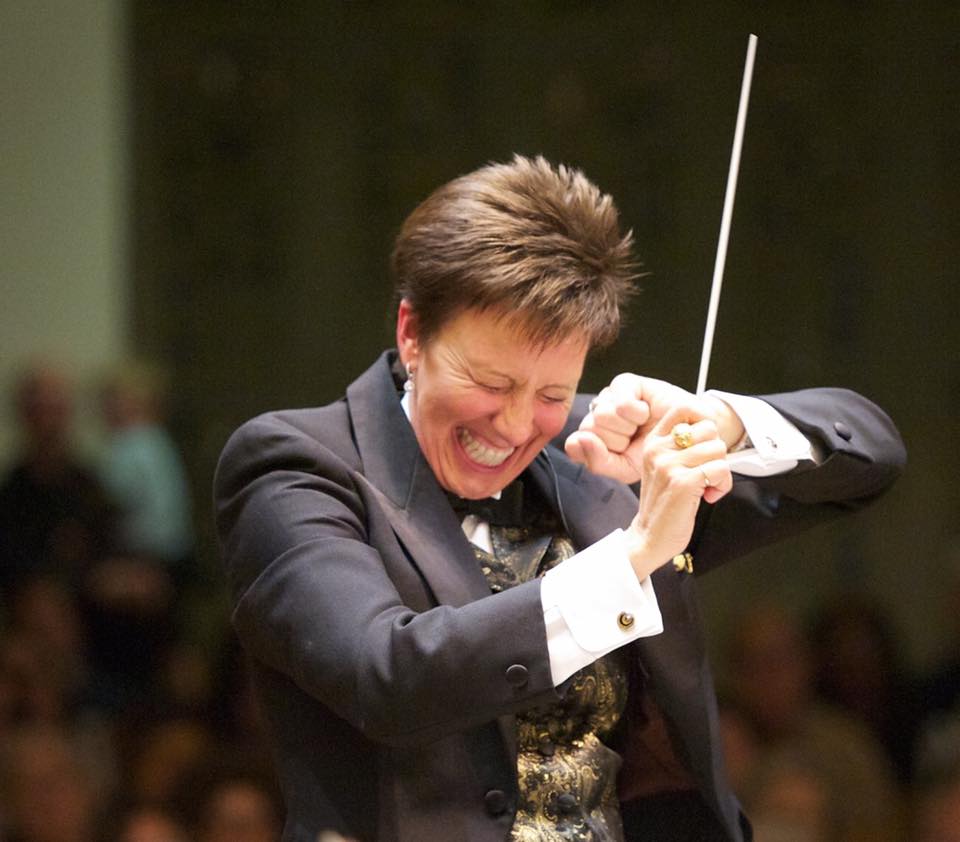 From the moment Conductor, Nancia  D’Alimonte,  walks toward the podium, there is a spark that ignites the atmosphere. There is energy and joyfulness. Her sincerity to the audience and empathy for the musicians is unquestionable. A master storyteller, she involves the audience by revealing some hidden secrets and giving intriguing history about each piece.

What separates Nancia from many other conductors? Unity. There is a rare connection between conductor and orchestra. She brings the best out of the orchestra at the precise moment of every note of every score. They create each other- it is a sense where each makes the other. It seems as if she “sends” the music to the musicians and they return it to the audience. “When I step on the podium, something unique happens,” she said. The music comes through her.

Nancia D’Ailmonte is conductor of the Loudoun Symphony Orchestra (LSO).  She is also founder (2006) and conductor of the NIH Philharmonia. At Christmastime, Nancia conducts the beloved Kennedy Center Messiah Sing-Along. She is a busy person of great depth, with exceptional talents, a delightful sense of humor, and a variety of interests.

Conductor positions are tightly held and highly coveted. With approximately 1250 symphony orchestras in the United States, with anywhere from 60 – 115 musicians; there are approximately 90,000 musicians. There are  only about 1300 conductors.  A 2014 survey discovered that of the top 150 orchestras, there were only five conductors who are women.

In the November 10, 2019, conversation about the arts and law at the Kennedy Center, the late Supreme Court Justice, Ruth Bader Ginsburg, shared, “In my growing up years, I never saw a woman in a symphony orchestra.” She recounted the advent of the “dropped curtain” after a New York Times critic was certain that he could tell the difference between a male and female pianist only to get “it all mixed up” after he was blindfolded.

French conductor and composer, Nadia Boulanger (1987 – 1979), was asked in 1947, about being a woman and a conductor.  She said, “I’ve been a woman for a little over 50 years and have gotten over my initial astonishment. As for conducting an orchestra, that’s a job where I don’t think sex plays much part.”

Conductors have their own styles. Some are flamboyant making the performance all about themselves; some are timekeepers, and some are dreamers. Then, there is the rare conductor who  brings music to life. Nancia is that conductor. Having been principal horn for 12 years, she says of conductors’ styles, “I know, I was a player.” Hence, her empathy and consideration for the musicians.

Knowing the scarcity and competitiveness of conducting positions, Nancia chose to follow this path. She tells her incredible story, “When I had been principal horn for 12 years with the Oshawa Symphony Orchestra (outside of Toronto, Canada), our beloved conductor was stepping down. I was on the search committee. We viewed endless video tapes of less than stellar conducting examples – all by men. After every video, I would think to myself, “I could do much better than that!” Then came the final guest conducting experiences… one conductor led more with his non-baton hand (left), being quite flamboyant, and kept shouting to the orchestra, ‘play with me, you’re behind, you’re behind!’ ‘

‘During that time, I was teaching high school music and art. A friend told me about a conducting workshop with John Paynter, guest clinician. I hadn’t a clue who he was, but I went anyway. During his talk, I was captivated by his demeanor, his gentleness, his every word, and his examples of conducting! I elbowed my friend and kept saying, ‘I do that… I do that… I do that too!’ At the break, I could barely contain myself… I had to introduce myself to Mr. Paynter. He was just as genuine in person. He gave me his full attention; I was honored.’

‘I began taking private conducting lessons with John Paynter. I would fly to Chicago about every six weeks for private lessons with him. John was Director of Bands at Northwestern University; only the second director in 100 years.’

‘One final thing about this story – once I entered the Eastman School of Music to work on my Doctorate in Orchestral Conducting, I had the absolute pleasure to meet John Williams when he guest conducted the Eastman Philharmonia in an all-John Williams concert. I was able to share my story of how I decided to go into conducting with him… talk about full circle!”

About her goals for LSO, Nancia explained,  “I want to grow the orchestra and I want to make them irresistible.” She loves the Orchestra because she says, “The beauty of the Loudoun Symphony Orchestra is that they have good bones, they are super players, and have a positive attitude.” What about classical music not being terribly popular? “If you build it good . . . they will come,” is Nancia’s solution. She is on a mission to make a great orchestra exceptional.

Nancia described her relationship with members of the orchestra as,  “Always one of mutual respect. I do not follow the tradition of the dictator on the podium. Because I come from within the orchestra, the musicians know that I know their position, thus there is an appreciation from them.”

Among the roles of the conductor is designing the program. Nancia’s thoughtfulness and depth of musical knowledge give her the scope with which to make wise choices. Her goal is to please the audience and encourage and grow the musicians. Her musical selections and programming take into consideration the players’ strengths and the total number of players. She explained, “Some compositions work for 60-65 members while others like Mahler need over 100.” She explained that undertaking a composition designed for a very large orchestra and imposing it on a smaller one will not produce success of the composition or the musicians. She selects music to showcase the strengths of the performers which will ultimately please the audience and encourage the individual players.

Nancia has mastered her conducting image. She explained, “My conducting ‘costume’ is my own creation. After some experimenting, I decided on the tea-length skirt with satin stripes on the sides and a feminine slit, tails, and a beautiful brocade vest and matching bow tie. I want to be impeccable. Appearance is very important in this male-dominated environment.”

“The connection to my “instrument” (the orchestra) are my batons,” says Nancia.  She has six custom-made batons by Tate Newland. Nancia says, “He is the best, in my opinion. I have been working with him for almost 30 years – I have known him for longer than I know my husband.” Nancia explained that the white shaft is made of maple wood. The handle must be large enough to fit in her hand and hers are of interesting and exotic woods including cocobolo, 100-year-old cherry, curly maple, rosewood, and even a champagne cork (for fun). The baton must be perfectly balanced at the joint where the shaft meets the handle.  She always brings two batons with her.

Asked whether she prefers to conduct with a score or from memory,” Nancia explained, “Conducting without a score… this phenomenon came about from Arturo Toscanini, famed Italian conductor (early-mid 20th C.) who conducted at La Scala in Milan, the NY Philharmonic, and later led the NBC radio orchestra. He had an impeccable ear and began as a cellist. One thing lacking for him was good eyesight… he was farsighted. In order for Toscanini to see a score, he had to be bent over, with his face about 6 inches from the score… that is no way to run a rehearsal! He could memorize really well, out of necessity, he studied and memorized all his scores. It’s an impressive feat, to be sure, and made for intimidating rehearsals (he knew every part and would stare down musicians when asking them to play a passage – nerve-racking). While some conductors memorize today, it’s not because they have bad vision, it’s a parlor trick… it is not a requirement.’

‘I use a score as I’m not sure I would have enough time to properly memorize my scores. I like to be able to immediately help a musician in the event they miss something.’

‘The next time you see a conductor not using a score, watch his/her face and see where their eyes are directed. Usually, there is no connection to the orchestra… and being disconnected is not a good thing… the musicians will actually lead the conductor through the performance.”

Aside from conducting, Nancia’s friends know her for her sublime “refreshments.”  “My martinis are legendary. My Negroni is renowned, you should try one sometime” she said.

A self-professed “foodie,” Nancia likes to keep her knives sharp even cooking at home. She once made butter from scratch for a special dinner. As in her orchestral conducting, she is precise. Her planning  and presentation are meticulous.

A woman of great passions, Nancia’s world is extensive. From her legendary Negroni martini, to her superb shrimp (and her knives are precisely sharp), to her underwater scuba adventures (where she says is her second favorite place on earth), to her world travels, and of course, to her music, Nancia is infinitely curious and devoted to impeccable excellence. She shares her life and passions with her husband, Giancarlo.

What kind of music does a conductor listen to when not working? “I love a wide variety of music. I love jazz, New Age, World Music, and of course the classics.” She enjoys Brahms, Bartok, and Mozart.  The Rite of Spring by Igor Stravinsky and Mahler’s Symphony No. 1 are among her favorites.

Share this: I just read this on The Front Page Of Style and thought you would like it too.